Handholds and Footholds: The Celebrate Lit Blog Tour and Giveaway of Facing the Dawn

About the Book Book:   Facing the Dawn Author:  Cynthia Ruchti Genre:  Contemporary Women’s Fiction Release date:  March 2, 2021 Mara Jacobs has been struggling. While her humanitarian husband is digging wells in Africa and caring for widows and orphans, Mara has been battling the home front—working a demanding yet unrewarding job, trying to manage three detention-prone kids, and suffering from exhaustion and depression. Even her own marriage is deteriorating after a three-year separation. Then Liam’s absence turns into something more, changing everything and plunging her into a sunless grief. As Mara leans on those around her to find her way to healing and renewed faith, she discovers that even when hope is tenuous and the future is unknown, we can be sure we are not forgotten . . . or unloved. Facing the Dawn is an emotionally evocative novel that will resonate with readers’ lives and their life challenges. Hemmed in hope, this tender story will be one readers will not soon forget.
1 comment
Read more

Review of Of Sword and Shadow by A.L. Sowards 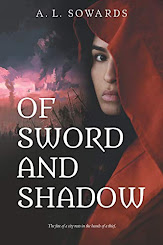 About the Book Greece, 1379 She is known by many names, none of them her own. In truth, she is an unnamed slave, nothing more than a weapon in the hands of her own in his attempts to provoke political mayhem. When she encounters a handsome young man while on an assignment, she thinks little of him-until he attempts to take what she has stolen. But in her line of work, failure is not an option. Gillen is intrigued by the mysterious woman who thwarts his mission. But when his path crosses hers again, his intrigue turns to gratitude as the thief he comes to call Eudocia save his life. The two form a bond of friendship and join forces to wrest control from a group of ruthless rulers. But as their camaraderie blossoms into something more, Gillen and Eudocia must fight for love even as they wage war for a better future.  Book Review Amazing. Fantastic. Heart-pounding. These words don't even begin to describe how I felt about this book.  In this story, we travel to Greece in 1379 and mee
Post a Comment
Read more

The Shadow of His Wings: The Celebrate Lit Blog Tour and Giveaway of Soon the Dawn

About the Book Book:   Soon the Dawn Author: Linda Brooks Davis Genre:  Historical    fiction Release Date:  February 9, 2020 Ella thought becoming a mother to five daughters a month after marriage would be difficult.  Sixteen years later, letting go is even harder.  What should be a joyous time of Amaryllis spreading her wings as she graduates from the College of Industrial Arts… isn’t. Ella fears that Amaryllis will lose a grip on her faith, her upbringing, and the goals Ella believes she should have.  Will Ella’s mother-in-law’s high society friends puff up the girl until Amaryllis loses sight of what’s important?  If Amaryllis stays away, can Ella trust that the Lord will keep the girl safe? Can she trust Him with her daughter’s well-being period? Of course, she can!  But will she? When everything begins to crumble around her, Ella must decide where she will place her trust—in her own capable hands or in the Lord’s sovereign ones.   Click here to get your copy!   Book Review I d
4 comments
Read more

Toughness of Heart: The Celebrate Lit Blog Tour and Giveaway of the Hesitant Heiress

About the Book Book:   The Hesitant Heiress Author:  Dawn Crandall Genre:  Christian Historical  Romance After being unjustly expelled from the Boston Conservatory of Music, Amaryllis Brigham sees her dreams of founding a music academy in her hometown of Seattle, Washington, disappearing before her very eyes. Now, the only way to achieve her goal comes with high stakes for someone set on avoiding men as much as possible: Marry within the year to inherit the immense fortune of her estranged grandmother. Amaryllis reluctantly moves in to her aunt’s Boston home and rubs shoulders with fashionable society. Despite her own misgivings, she soon finds herself quickly falling in love with the most unlikely of men–Nathan Everstone, the envy of every eligible female, whose father has haunted her dreams for the decade following her mother’s tragic death. However, Nathan turns out to be much more than he seems…and everything she never knew she wanted. But just as everything Amaryllis has recentl
3 comments
Read more

Love Thy Neighbor: The Celebrate Lit Blog Tour and Giveaway of The Least of These

About the Book Book:  The Least of These Author: Kathleen Neely Genre: Christian Urban fiction Release date: 2019 Journalist Scott Harrington sets out to write a documentary on the lives of three homeless men. He hopes to win a prestigious award and his father’s respect. In the process, he uncovers stories of heartbreak, trauma, and rejection, causing him to revisit his own tragic past and the guilty secret that he holds. Claire Bassett has been searching for her husband who went missing a year ago. The attentions of another man cause her to question if she should continue to search or move on with her life. As Scott and Claire’s stories overlap, will there be restoration or rejection?   Click here to get your copy!   Book Review I really enjoyed reading this book. I learned so much and I was really interested in Scott’s plotline. Although it took me a while to get into Claire’s. I really didn’t get interested in it until about halfway through the book, when more of her story is reve
Post a Comment
Read more
More posts