Showing posts from January, 2020
Show all

The Island of Hades: The Celebrate Lit Blog Tour and Giveaway of the Gray Chamber

About the Book Book:   The Gray Chamber Author: Grace Hitchcock Genre:   Christian Historical / Suspense Release Date:  January, 2020 Will Edyth prove her sanity before it is too late? Step into True Colors —a new series of Historical Stories of Romance and American Crime On Blackwell’s Island, New York, a hospital was built to keep its patients from ever leaving. With her late parents’ fortune under her uncle’s care until her twenty-fifth birthday in the year 1887, Edyth Foster does not feel pressured to marry or to bow to society’s demands. She freely indulges in eccentric hobbies like fencing and riding her velocipede in her cycling costume about the city for all to see. Finding a loophole in the will, though, her uncle whisks Edyth off to the women’s lunatic asylum just weeks before her birthday. And Edyth fears she will never be found. At the asylum she meets another inmate, who upon discovering Edyth’s plight, confesses that she is Nellie Bly, an undercover
2 comments
Read more

The Expedition of Susanna and Thad: The Celebrate Lit Blog Tour and Giveaway of Freedom in the Mountain Wind

About the Book Book: Freedom in the Mountain Wind Author: Misty M. Beller Genre: Christian Historical Romance Release Date: January 14, 2020 The last epic journey before her life changes forever. Susanna Wilkins will do anything to make her father’s final dream come true, including trek along the path Lewis and Clark explored into the untamed wilds of the Rocky Mountains. Every mile is more crucial now that lung cancer is stealing Pa’s last days faster than she can come to terms with losing him. The journey becomes harder than she ever expected, but paddling upriver through fierce rapids and fighting hungry grizzlies isn’t what terrifies her the most. Beaver Tail endured more than he can stand from the women in his Blackfoot camp, but the last disaster gave him the final shove he needed to join this band of brothers searching for one of their group who’s gone missing. The last thing he expected was to find a white woman and her sick father stranded at the base of mas
2 comments
Read more

Review of "Diamond in the Rough" by Jen Turano 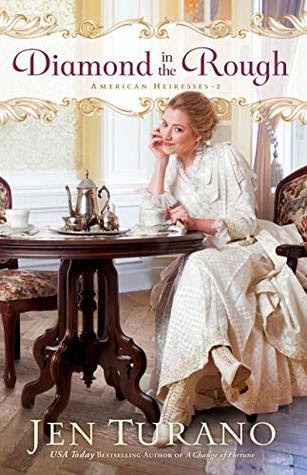 Over my winter break, I have been enjoying Diamond in the Rough by Jen Turano. The second book in her American Heiresses series, this book is about a woman named Poppy Garrison, who leaves her farm life in Pennsylvania to go to New York for the social Season. Her grandmother is determined for her to become the diamond of the first water, but with her constant mishaps, that dream her grandmother has for her seems impossible to achieve. Meanwhile, Lord Reginald Blackburn has arrived in the city from London to help his cousin find an American heiress. Due to the proper manners he possesses, Poppy's grandmother pays him to teach said manners to Poppy. But with Poppy always landing herself in trouble, and with his heart also included in that trouble, the task is proven to be more than what either of them bargained for. Jen Turano certainly did not disappoint in her book. From the very beginning, the readers find Poppy already involved in some sort of trouble. During a Quadrille, Popp
Post a Comment
Read more

Ordinary for the Extraordinary: The Celebrate Lit Blog Tour and Giveaway of Common

About the Book Book:   Common Author:  Laurie Lucking Genre:  YA Fantasy Release Date:  February 14, 2018 Only one person knows of the plot against the royal family and cares enough to try to stop it—the servant girl they banished. Leah spends her days scrubbing floors, polishing silver, and meekly curtsying to nobility. Nothing distinguishes her from the other commoners serving at the palace, except her red hair. And her secret friendship with Rafe, the Crown Prince of Imperia. But Leah’s safe, ordinary world begins to splinter. Rafe’s parents announce his betrothal to a foreign princess, and she unearths a plot to overthrow the royal family. When she reports it without proof, her life shatters completely when the queen banishes her for treason. Harbored by an unusual group of nuns, Leah must secure Rafe’s safety before it’s too late. But her quest reveals a villain far more sinister than an ambitious nobleman with his eye on the throne. Can a common maidservan
1 comment
Read more
More posts