Showing posts from September, 2019
Show all

Review of "Far Side of the Sea" by Kate Breslin 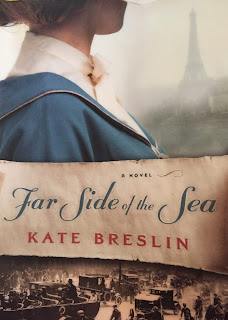 It's been a hot minute, hasn't it? I apologize for the long wait, but my life got so caught up with classes and work. I also did not want to rush through Kate Breslin's Far Side of the Sea. I wanted to make sure that I was able to enjoy it and be able to give a thorough and honest review of this book. Far Side of the Sea is a World War I romance novel about a soldier named Colin Mabry. After being injured and losing an arm in battle, Colin's duties changed to decoding messages for MI8. His life is turned upside down, though, when he receives a message from an old flame-Jewel Reyer. The message is urgent, forcing him to leave England and go to France. But when Colin arrives, Jewel isn't in France. He finds out that she wasn't even the one who sent him the message. It was her sister, Johanna Reyer, who had come across Jewel's diary and is desperate to find her, afraid that she is in the hands of a German agent. With the uncertainty of war and the unwelcomi
4 comments
Read more
More posts