Showing posts from August, 2020
Show all

The One Who Gives Life: The Celebrate Lit Blog Tour and Giveaway of Two Rivers

About the Book Book:  Two Rivers Author: Michael W. Henry Genre:  Fiction Release Date: April 10, 2020 In 1840 Pastor Allen Hartman leaves behind his white-steepled church in New York, and the woman he hopes to marry, to serve as a missionary to Indians in the Oregon Territory. On his epic westward journey, he is plunged into the dark end of spiritual warfare and vital intercession. His mettle is further tested when he’s asked to stay in a village of Arapaho already contending with a malevolent witch doctor—where Allen has to draw upon courage he didn’t know he possessed and discovers ministering to Indians is not at all what he imagined. Arapaho medicine man Two Rivers knows one thing—the Great Spirit is sending White Falcon to help his people defeat the malicious spiritual forces determined to overpower the tribe. But even as White Falcon teams up with Two Rivers, Allen finds himself enslaved in a cave and in a heaven-meets-earth clash of faith with an evil sorcerer. Wit
6 comments
Read more

Update: Not Going to College?

August 18, 2020
Hello everybody! I hope everyone is doing well. I'm just giving a quick update on my life. As the title of this blog post implies, I am not going off to college. At least, I'm not going to be on a college campus for this fall semester. Trinity Christian made the decision a couple weeks ago to go fully online-only students who need to be on campus will be on campus. And since that does not apply to me, I am doing my classes remotely. It was disappointing to get the news, but I am going to try to make the most of it. And I'm crossing my fingers that the campus will be open for spring semester.  So what am I doing for my fall semester? My plans aren't fully set in stone, but I hope to be doing something fun. Once the plans are set, I will make another update to let you all know. And yes, it does have something to do with writing. I am very excited about it!  So, in one week, I'll have my (virtual) transfer orientation, and that will kick off my junior year of college!
Post a Comment
Read more

About the Book Book:  Caleb’s Destiny Author: Carole Brown Genre:  Historical Romantic Suspense Release Date: June 2020 Mr. Michael, Destiny Rose McCulloch, and Hunter have a mysterious history . Why were three fathers, all business partners, murdered under suspicious circumstances while on their quest to find gold? Hunter is determined to protect his boss and the precocious young lady who he suspects holds a key answer to his questions. Mr. Michael wants only to be left alone to attend to his property, but what can he do when Destiny refuses to leave and captures the heart of every one of his employees? Destiny almost forgets her quest when she falls in love with Mr. Michael’s ranch and all the people there. And then Mr. Michael is much too alluring to ignore. The preacher man back east where she took her schooling tried to claim her heart, but the longer she stays the less she can remember him. She only came west to find a little boy she knew years ago. A little boy
3 comments
Read more 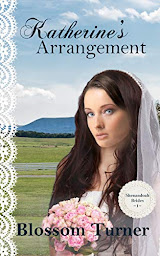 Katherine’s Arrangement is about a young girl who decides to enter an arranged marriage with a wealthy man. In exchange, the man will provide for her poor family. But will the two be able to love each other and forgive one another for their mistakes? Or was the marriage a bad decision that might have ruined both of their lives-forever? I’m going to be honest here that when I started reading this book, I thought it was going to be your typical Christian romance story-which, to be honest, I’m not overly fond of that genre. But as I continued to read the book, I realized that this story was different. And I should have never doubted the author-especially after reading her previous book, Anna’s Secret. Katherine’s Arrangement is filled with heartache and pain. It emphasizes that marriages aren’t perfect-and they really require patience and love to work. The characters in the book make mistakes, and Josiah and Katherine are blinded by uncertainty, anger, hurt-and ultimately, sin.
Post a Comment
Read more

Harsh Reality: The Celebrate Lit Blog Tour and Giveaway of Six Years and a Quarter Way Through

About the Book Book:  Six Years and a Quarter Way Through Author: Cassandre Brissot Genre:  Christian Romance, Coming of Age Release Date: April 19, 2019 Six Years and a Quarter Way Through  is a story about a young woman who’s lost her way. Like many of us, Leah believed that the vision supersedes the process until, at age twenty-six, she stops believing in the vision and the one who gave it to her. Leah has lost her faith, her job, her confidence, and maybe her mind. Utterly defeated and without hope that her dreams to become a star would come true, she meets Trenton Shaw, a rich, powerful, handsome, hot-shot producer who has spent the last six years of his life trying to find her. Leah is weary of Trenton initially, particularly since he is adamant about enlisting her for a new reality show that he is putting together called “Star Quality.” However, after reasoning that she has nothing left to lose, she consents. If she wins the show, she will receive a cash prize, an agent
4 comments
Read more
More posts