God Was Here: The Celebrate Lit Blog Tour and Giveaway of The Good German Girl 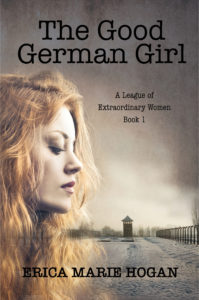 When battle-hardened Private Bernie Russell witnesses a fellow soldier shoot a young German boy with his hands up, he’s shaken to his very core. Then, as that same boy is dying, he presses a packet of photographs and letters into Bernie’s hand and utters three words in English.

After having the letters translated, he discovers they were written by the soldier’s twin sister and the photographs within the packet reveal evidence of Hitler’s plan to wipe out the Jews.

Margot Raskopf is a young art teacher, forced to conform to the education Hitler has designed. Then, when one of her sources with the underground resistance receives a letter for her from an American soldier, she’s shocked and filled with renewed hope. But Margot has been harboring a secret. In her house she hides a young Jewish woman she’s known since childhood, risking being discovered by the gestapo with each passing day.

As they begin a dangerous correspondence, both Margot and Bernie embark on treacherous journeys. One taking Bernie across Europe and right into Germany. Another taking Margot through the gates of Auschwitz … and under the scrutiny of Josef Mengele.

I have read a lot of WWII fiction. It is one of my favorite genres. So when I read the plotline for The Good German Girl, I had to sign up for the blog tour. And Erica Marie Hogan did not disappoint.

Hogan did not sugarcoat the suffering people endured during this time. The fear, the pain, the terror…Hogan presented it all in its ugly glory. 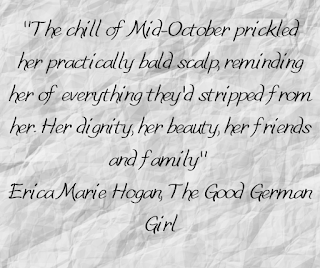 The minute I met Bernie I was drawn into the story. I fought with the characters, trembled with them, cried with them, breathed with them. I know I could never fully grasp what happened in the concentration camps, what the people there had to suffer through. But through reading this story, I was able to understand it just a little bit more.

Both Bernie and Marie are strong characters, fighting for what they believe in. I loved how each clung to the hope that they would one day meet, that Bernie would save Marie from her circumstances.

My only problem with the book is the ending. I won't get too into it due to spoilers, but I felt like it ended abruptly. I also wish that there was more about Josef Mengele, although I do understand that with the horrors of the war, having him have a bigger part to the story might be too hard to write and too difficult to read.

Overall, though, I did really like this book. I would highly recommend it to any fans of Word War II fiction. I hope to read more from Hogan in the future. 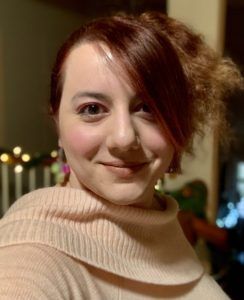 From as far back as she can remember, Erica Marie Hogan loved to write. When she was a little girl she adored make believe, but gradually her imagination became too big to restrict it to playtime and so, she wrote.

Erica was born and raised for nine years on Orient Point, Long Island, New York. After that she moved with her family to Virginia and, finally, to Texas where she now lives. She was homeschooled, is an avid reader, and a member of American Christian Fiction Writers. She lives to plot new stories, enjoys a good tear-jerker, and chocolate is her cure for any ailment.

Erica’s wish is to continue to write stories that not only drop her readers into the middle of historical time periods, but also to show the ability to rise up out of adversity and tragedy in hope, faith, love, and strength. When it comes to genre, she has no limits.

There are two things I love in a good story. History and Romance. And when the two come together? Well, I’m sold.

Hi, I’m Erica Marie Hogan, the author of The Good German Girl, book one in a Historical Fiction series called A League of Extraordinary Women. When I set out to write a novel based during World War II, I never imagined The Good German Girl would be the end result. I started with an idea about a young German woman living in Berlin who wants to fight back against Hitler’s rule. This mustard seed of an idea took me on a journey through the battles at Omaha Beach, Aachen, Germany & the Battle of the Bulge. It took me through the gates of Auschwitz and right into Josef Mengele’s lab.

This little idea took me on a quest for love in the most horrible of circumstances. Where war and death divided two people who should be enemies but, through a miraculous correspondence, found each other and knew in their hearts they were meant to save each other. The Good German Girl is a Historical Fiction novel about the tragedy of World War II with the gentle beginnings of an epic love woven through the pages. I hope you enjoy the story of Margot Raskopf and Bernie Russell as much as I enjoyed writing about them!

Where Faith and Books Meet, April 21

For Him and My Family, April 25 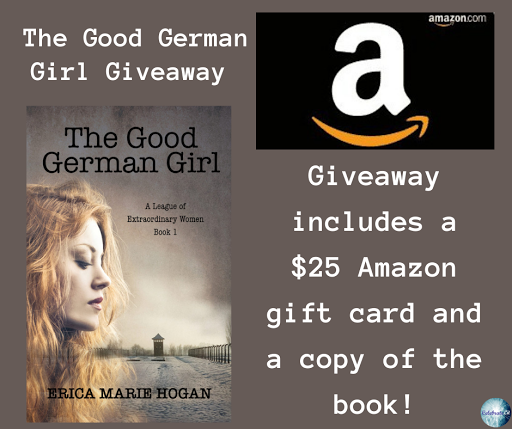 To celebrate her tour, Erica is giving away the grand prize package of $25 Amazon gift card and a paperback copy of the book!!