Never Trust a Faerie: The Celebrate Lit Blog Tour and Giveaway of Of Gold and Iron 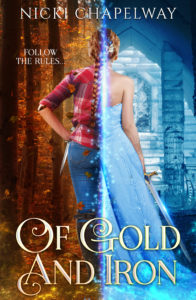 Book:  Of Gold and Iron

“Swear on something else. Swear on your humanity.”

I suddenly find it very hard to swallow. My humanity? With a jolt I realize that there are far greater things at risk here than just my life. I’m in the faerie world, anything could happen. Even immortality.

The Otherworld is the home of the faeries, deceitful, decadent, and deadly. As the next in line to be-come Guardians, Jaye and her brother Thomas are tasked with defending the human world from all things magical. But when a routine scouting mission ends with them trapped in the Otherworld, it becomes pain-fully clear that someone doesn’t want them to leave the world of the faeries. Determined to not become an immortal’s pawn, Jaye kidnaps Ravven Crowe, an arrogant solitary faerie, so that he can guide them safely home. But things quickly go from bad to worse when they are captured by the Winter Court and embroiled in a plot to start a faerie civil war. Thomas is enslaved by an Unseelie faerie, and it seems that the only way to save her brother and avoid a war is for Jaye to ally herself with Ravven.

The faeries are governed by a set of strict laws. For their own safety, the Guardians have their own rules. But with Thomas’s life hanging in the balance there is only one way to save him that does not include breaking the faerie’s Fair Law, a crime that ends in death. Together Jaye and Ravven must compete in a series of deadly tests given by the faerie courts in order to earn Jaye the right to be named the Fair Assassin and wield the Blade of Gold and Iron. As the Fair Assassin she will be permitted to kill any faerie she so chooses, but first she has to live long enough. Walking a fine line between destruction and further entanglement with Crowe, Jaye is going to have to break her own rules if she wants to win. She must trust a faerie. Her life and humanity depend on it.

If anybody knows me, they know that one of my favorite genres is fantasy. I fall in love with almost any fantasy book I read. And this book is no exception. I’d probably go far as saying that it is now on my top five list of my favorite fantasy novels. 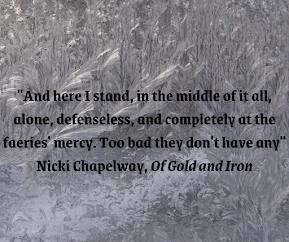 Jaye is headstrong and somewhat reckless. She follows her emotions and doesn’t stop to think of the consequences, which lands her in some sticky situations. I love her friendship with Ravven. Actually, I just like Ravven in general. He is witty and in love with himself. The banter between Ravven and Jaye is fun and entertaining.

I did not want this book to end. And to say I was upset when it ended is somewhat of an understatement. I was fuming because I did not want to stop reading. The author ends on a cliffhanger which did not help matters. I need to know what happens next!

The author is very talented and the way she portrays the characters made them seem very real. If you haven’t figured out yet, I am very excited for the next book. 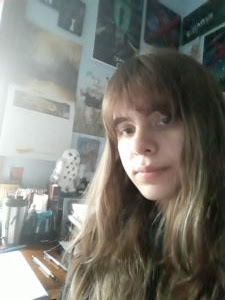 Nicki is a twenty-something author of clean YA speculative fiction. She has been writing since she was eleven years old, and has published several works including portal fantasies such as A Week of Werewolves, Faeries, and Fancy Dresses and A Certain Sort of Madness; as well as Winter Cursed a dark fantasy Snow White retelling.

Nicki lives in Ohio where she spends far too much time watching TV and sleeping. She listens to music basically all the time, and adores obsessing over mythologies, her shows, and her slew of fictional boyfriends. When not writing, she can usually be found at her desk with either a paintbrush or a pen in her hand.

I find mythology fascinating, and one of my favorite mythological creatures are faeries (and dragons, but this book is mostly about faeries—although there is at least one dragon…). Growing up as a self proclaimed tom boy, I found faeries to be boring and trite creatures, all sparkle and not enough teeth. I preferred elves with their factions: wood elves, light elves, dark elves, high elves… etc.

Tolkien has inspired so much about my fantasy worlds—actually he is directly responsible for why I write fantasy—and because of that I adopted his own source of inspiration for many of the events of Middle Earth: myths.

I started reading up on myths, especially Celtic which is where Tolkien derived some inspiration for his elves (the elf part is of course Norse, but the returning to the Undying Lands is based on the mysterious disappearance of the Tuatha De Danan in Celtic myths which were originally considered to be gods but later became known as a type of faerie). As I dug deeper into Celtic myths and started reading Irish folklore, I came across creatures that were so complex that one individual could have the characteristics of light, dark, high, and wood elves all meshed together. I became fascinated by these walking contradictions. Immortals that can be harmed by such mortal things as iron and bread. Tricksters who cannot lie. Beings with powerful magic, but governed by a very strict set of laws and compelled into obedience.

And much, much scarier than the faeries I grew up hearing about.

Irish mythology gave me everything I needed, from many different forms of faeries to defining characteristics and names. All I had to do was fit them into my world… and come up with a plot and characters, of course, but those I actually got from a dream.

Through the Fire Blogs, February 12

Because I said so — and other adventures in Parenting, February 17

For Him and My Family, February 19 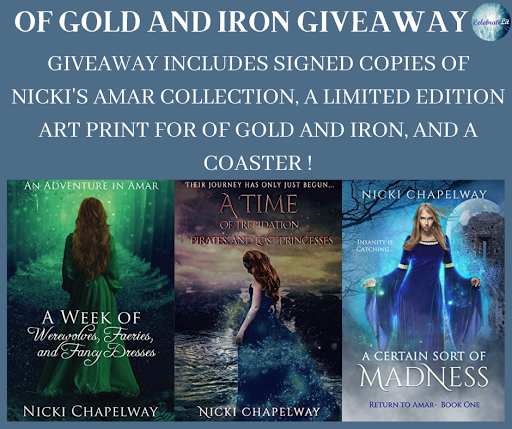 To celebrate her tour, Nicki is giving away the grand prize package of signed paperbacks of Nicki’s other three novels, a limited edition art print for Of Gold and Iron, and a coaster!!