A Natural Born Leader: The Celebrate Lit Blog Tour and Giveaway of Ablaze 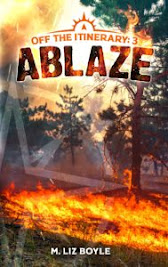 This summer the Stanley sisters and the Miles boys are excited to hike together again, and now they have the unique opportunity to help two of their ranger friends with an outdoor program in the beautiful Montana mountains.

Marlee has always considered herself a willing follower. Give her a direction and she’s happy to help. Her older sister Ellie is a natural leader, and Marlee is content in her role as assistant.

Marlee and her sisters have been assigned to help with Ranger Rose’s team, and they are savoring the adventure. But in a heartbeat while the group is divided by a few hundred feet, fire breaks out between Ranger Rose and Marlee’s group. In this enthralling finale to the Off the Itinerary series, Marlee must face her fears with courage that only God can provide.

I read the first book in this series, and somehow missed out on the second one (which you know I will definitely try and read it, even though this book gave some spoilers). I really enjoyed the first one, so I was really excited to see Ablaze going on a blog tour. 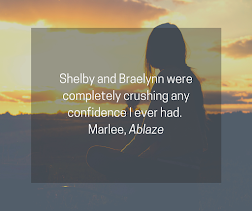 While the first book, Avalanche, focused more on the adventure aspect, Ablaze honed in on Marlee and her insecurities, which I really appreciated. Marlee not only went on another physical adventure, but she also went through her own emotional and spiritual adventure. We got to see her as she struggled with friendships and not having any confidence in herself. We watched her as she was being encouraged to lead but felt like she couldn’t or shouldn’t.

I also once again learned so much about the great outdoors in this novel as I did with the first one. It’s one of the reasons why I like this series. It’s entertaining as well as informative.

And onnce again, there was a strong Christian element as Marlee learned to trust God through everything she went through. I found her strength and faith admirable, and I rooted for her throughout the story. 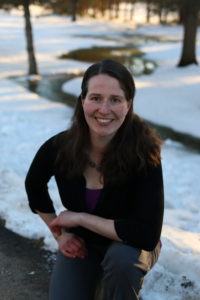 Liz is the author of the Off the Itinerary series, the wife of a professional tree climber, and the homeschooling mom of three energetic and laundry-producing children. Liz once spent a summer in Colorado teaching rock climbing, which she believes was a fantastic way to make money and memories. She resides with her family in Wisconsin, where they enjoy hiking and rock climbing. Liz and her husband have also backpacked in Colorado and the Grand Canyon, which have provided inspiration for her writing. She makes adventurous stories to encourage others to find adventures and expand their comfort zones (though admittedly, she still needs lots of practice expanding her own comfort zone).

After sending my five teenage characters through an avalanche and subjecting them to a lunatic with handcuffs (during a flash flood), I decided that a wildfire was the next disaster they should endure. From a plot perspective, a wildfire allows for much excitement; but I especially love the character refinement that takes place as my cast faces this natural disaster in the finale to my Off the Itinerary series. I hope your family will find encouraging entertainment in Ablaze.

For Him and My Family, June 10

For the Love of Literature, June 14

Because I said so — and other adventures in Parenting, June 15 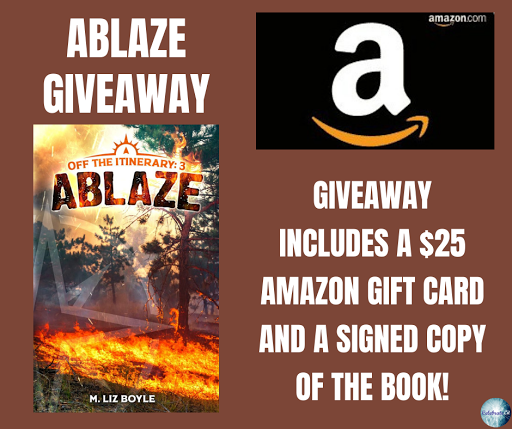 To celebrate her tour, M. Liz is giving away the grand prize of a signed copy of Ablaze and a $25 Amazon gift card!!